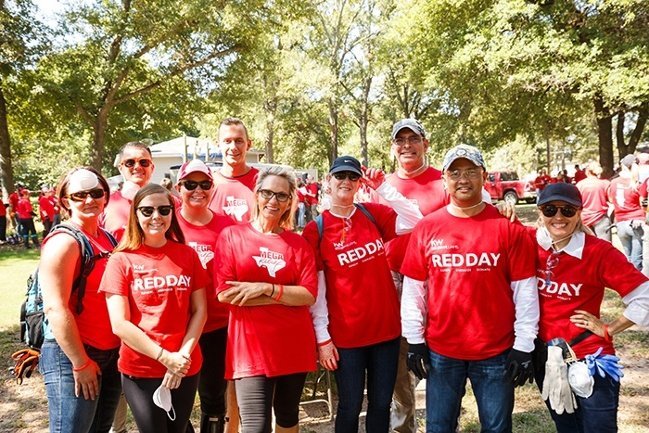 When Hurricane Harvey hit, devastating communities across the Texas coast, Keller Williams pivoted and transformed its annual Mega Camp training event in Austin into Mega Relief. It sent hundreds of agents to help de-muck flooded homes and volunteer in shelters in Sealy, Texas.

Anna Sherman and her son Jared, 18, were sleeping when water started rising in the Brazos River. “We got a phone call from a neighbor to get up and get out,” she says. The creek near her home in Sealy, Texas, had already spilled a foot and a half of water onto the road. Ultimately, it would rise several more feet. “We grabbed what we could put in a backpack, and we took off as fast as we could.”

Two weeks later, Sherman stands in her front yard surrounded by Keller Williams associates from across the country. They’re pulling out sheetrock, clearing away debris and helping disinfect her home so she can rebuild. She’s one of dozens of Sealy residents Keller Williams has helped this past week. Instead of workshopping at the company’s weeklong Mega Camp event, agents have spread out across Austin and affected communities to volunteer. In Sealy, volunteers went to work de-mucking houses.

After Hurricane Harvey hit the United States, devastating communities across the Texas coast, Keller Williams’ nonprofit, KW Cares, partnered with The Salvation Army to send supplies. But it wasn’t enough; the company wanted to do more. And so, Keller Williams’ leadership pivoted their second largest event of the year and diverted agents who were slated to attend Mega Camp to locations like Sealy for a Mega Relief event instead.

“We’re so blessed to have the help and the assistance that is so dearly needed,” says Sherman, who’s now living in a camper in front of her home. “It’s definitely tough, because you lose everything. It turns everything upside down.” Her voice wavers. “But we didn’t lose our lives, and we got our dogs.” She looks around at the volunteers. “The feeling of helplessness you get when things like this happen, it’s finally starting to go away.”

Peter Rogers, Michelle Ellis and Tim Beverlin all traveled from the Keller Williams Bryn Mawr market center in Pennsylvania to help. “This explains our culture without any words,” says Ellis, who has been with the company for less than a year. “It’s a once-in-a-lifetime opportunity to come out here and help like this.”

Sealy, a city of about 6,000 that sits 50 miles west of Houston, was one of the hardest-hit areas by Hurricane Harvey. And worse, Sealy was just starting to recover from a massive flood in 2016 when many homes took in water up to their roofs. Sealy was also healing from a rare microburst in May that destroyed many homes and businesses.

“People are devastated,” says Rusty Griffin, a lead pastor at Christian City Fellowship in Sealy. Griffin has helped coordinate relief efforts in Sealy, especially in the Lazy River area, a secluded spot that’s often overlooked in times of crisis. “They were trying to rebuild their lives, and now they’re going through this again. Without Keller Williams [the help they’re getting] wouldn’t have been possible.”

Abbey Wood from Keller Williams Raleigh wasn’t originally signed up to attend Mega Camp, but she signed on after it transformed into a week of service. “It’s an amazing thing,” she says. “I’ve never worked for a company where everybody can come together like this, and everyone values the same things.”

From southern Maryland, Danny Martin and his team were on their way to Florida with a trailer and supplies to help Hurricane Irma victims, when they received word that the Federal Emergency Management Agency (FEMA) would likely not let them in. “So we regeared,” he says, heading instead to Sealy. “Our team’s vision is to revolutionize real estate, to impact the community and to change lives,” he says, a mission well-suited to their Sealy trip.

For volunteers, the devastation and stories of loss across Sealy were shocking. One couple was hit with the death of their new baby and a flooded home within days. Associates, however, were humbled and inspired by Sealy’s resolve and their love of community.

One Sealy resident, Joyce Galyen, has lived there for nearly 40 years. She raised her children in her home, which took on four feet of water. “All my things are gone,” she says. This was the third time her home has flooded. She’s not sure where to go from here, whether she’ll rebuild or sell. In the meantime, though, she’s happy to have Keller Williams in town. “We’re getting the support that we need,” she says.